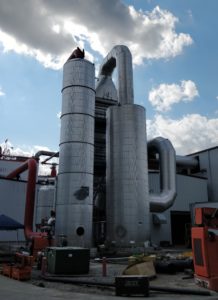 ADAMS, NEBRASKA — E Energy Adams, LLC in September became the second Nebraska-based ethanol producer to implement Bioleap’s patented Dryer Exhaust Energy Recovery (DEER) system to ratchet down fuel consumption and increase overall plant efficiency at its plant in Adams, Nebraska. The addition of the new system represents the most significant reduction of natural gas use in the plant’s eleven years of operation.

In its first two months operating with DEER, which recovers and recirculates waste heat to produce clean, boiler-grade steam, the Gage County facility cut natural gas usage by approximately 20%. The improvement means that E Energy Adams, which produces over 80 million gallons of ethanol per year, shrank its overall carbon footprint.

“E Energy Adams ships most of its ethanol to California, and carbon footprint means everything. Lowering our carbon index improves our competitiveness in the industry,” said Carl Sitzmann, CEO of E Energy Adams. “Improving the environment while increasing profitability makes this a win/win project.”

“Bioleap is proud to support the Nebraska ethanol community with energy solutions,” said James Knight, President of Bioleap. “E Energy Adams should be proud of what this kind of energy performance means for its facility and for the broader ethanol industry in Nebraska, the second largest ethanol producing state in the country.”

Following Siouxland Ethanol in Jackson, Nebraska, E Energy Adams is the second biorefinery in Nebraska to partner with Bioleap and install a DEER system. With a leadership team delivering more than 30 years of expertise in biorefinery engineering, Bioleap is the first to perfect and patent an energy recovery system like DEER. The company is in conversations with a number of other leaders in ethanol production to save energy costs with DEER. The company expects to bring numerous new energy recovery systems online in 2019.

“The efficiencies we are bringing to the ethanol industry with the DEER system will save millions of dollars for our customers and have a very positive impact on the environment,” Knight said.

About the DEER System
Bioleap’s DEER system captures waste energy from the dryer/thermal oxidize system(s) to produce clean, boiler-quality steam to recirculate through the system for a handful of major gains at the facility. For more information, please visit www.bioleap.com.

About E Energy Adams LLC
E Energy Adams, LLC operates a dry mill ethanol plant in southeast Nebraska that processes corn into ethanol. It produces modified wet and dry distillers grain feed products, which are sold to local and regional markets. The company was founded in 2005 and is based in Adams, Nebraska.